Being one of the many students attending Plymouth State who is on the meal plan, I find it hard to think of a reason why a 4th meal concept has not been applied to the dining hall services on campus. I know almost any student can tell you they have had a moment on a late night of studying where they have either had to order out or survive on Cheetos and Easy Mac because the dining hall was closes at 8pm.

Many other universities I have visited, including Temple University which I attended for a year, have caught on to this idea and the students tend to love it. They all tend to follow the same idea of just having real quick and easy finger foods like mozzarella sticks, chicken nuggets, and other similar quick fixes. 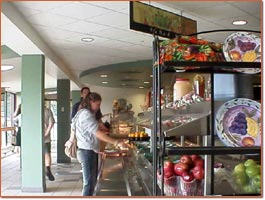 Now I know in reality having a 4th meal service would probably mean it would come out of the pocket of the students, but personally I find that this would be worth it and would definitely allow for me to get the most out of the money I am spending. Then again maybe some of the money saved by the universities trayless plan can go to keeping the dining hall open for a few extra hours, but who knows. Something to think about.