Real Madrid drop their first match of the season without their $131,000,000 striker Cristiano Ronaldo. Out with an ankle injury, it seems that although Real spent upwards of $360,000,000 on transferring in new talent this year on players like Kaka and Benzema, that they still may be too dependent on a skills of single players. A problem that no top flight team in La Liga can afford to have especially if they plan on staying in the running for the league and tournament play.

"Cristiano is great player who can decide a game, open up a game, but a club like Real Madrid cannot afford to depend on only one player. It should be above individuals," Pardeza told daily newspaper El Mundo.

Teams such as Barcelona will make the season very difficult for Real if their poor defensive strength and dependence on individual players becomes habitual. Currently Real are only 3 points behind Barcelona in the table for La Liga, but the returning treble winners are showing no signs of slowing down. It will more collective effort and drive from Madrid if they hope to dethrone last years Spanish and UCL Champions. 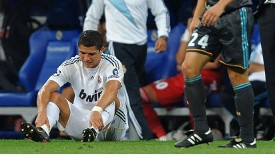 3 thoughts on “Moneyman Goes Down in Real”