One of the most anticipated derby matches of all lived up to its expectations today with a match between FC Barcelona and Real Madrid. With stars returning from injury to make the match including Cristiano Ronaldo for Madrid. Barcelona saw starters Eric Abidal and Lionel Messi return, as well as Yaya Toure and Zlatan Ibrahimovic made appearances from the bench. Cristiano would have the best chance for Real to get ahead midway through the second half when he struck the ball first time with only the keeper to beat. Victor Valdes would make a great save on the play as Ronaldo struck the ball directly at him allowing for a brilliant foot save. Zlatan would make the largest impact on the match with his goal in the early running of the second half, just five minutes after being subbed on for Henry. More drama was introduced into the match as Sergio Busquets for Barcelona was sent off in the 63rd minute leaving Barcelona a man down with nearly a half hour left in the match. Despite the disadvantage Barcelona would give away nothing to Real, and even kept their edge in possession. Messi would miss a chance to put Barca ahead by two scores from a chance he had one on one with Casillas, but would fire directly at the goalkeeper. In the closing moments of the match the playing field would be leveled as Diarra was sent off for Real with his second yellow card. Ibrahimovic's goal would prove to be all Barca needed to finish off Madrid as 'El Clasico' came to a close. With the victory Barcelona reclaimed the top spot in the Spanish League moving two points above Real Madrid. 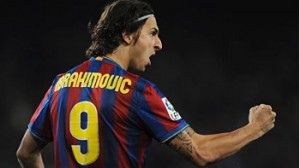