The New England nation took a huge blow last night as the Patriots fell victim to a 38-17  massacre at the hands of the New Orleans Saints. Progressing the Saints to 11-0 in the regular season. The only other undefeated team being the Indianapolis Colts. This victory was much more than just another win for the Saints however. This cements them as a team to truly be respected by all despite the fact that they have never won a Superbowl like the other top franchises in the NFL. Also, this helps tremendously in silencing the critics who have said that Drew Brees, the Saints quarterback, has not been able to show up and play well on the big stage. The Saints appeared to be able to score at will against the Patriots defense just as they have with every  other team they have faced, as the highest scoring team in the NFL averaging just over 32 points a game. Equally as impressive was the Saints defense, holding one of the most dangerous offenses in the league to just 17 by excellent coverage and forced turnovers. The Patriots were just unable to make the big plays that New England has been accustomed to.

After this win for the Saints, looking at the tail end of their regular season it appears that this may be the biggest game as far as proving themselves as a team that has Championship potential. Though it is still early to speculate on anything, it is foreseeable that they could go 16-0 with a perfect regular season record, based on the quality of the teams they have left to play. This team seems to be hitting their stride, with an offense that no one has been able to figure what to do against, and an ever improving defense. This team could be the next big thing in the NFL. 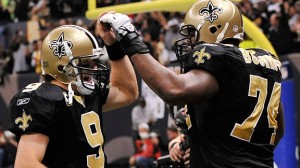 2 thoughts on “Patriots Who??”